While reading about microscopy, I came across mentions of a parameter called numerical Aperture (NA).

NA is a measure of the ability of the objective lens to gather light and resolve it, at a fixed distance from the specimen, through a specific media (e.g. air, water, immersion oil).

As shown in the figure, light from the specimen enter the objective in an inverted cone as seen in this figure:

The angle µ is half the angular aperture A.  NA is calculated by the following equation:

n is the value of the refractive index of the medium between the specimen (the cover glass) and the objective. The value of n is between 1.0 (for air) up to 1.51 (for special immersion oil).

When imaging through air (usually with low magnifications), then n=1 and so NA depends solely on the sin of µ which theoretically can be a maximum of 1 (sin(90°)=1). In practice, it is difficult to achieve NA>0.95 with “dry” microscopy (i.e. through air).

Therefore, many microscope objectives (mostly for high magnifications) are designed to be used with water (n=1.33), glycerin (n=1.47) or immersion oil (n=1.51).

So how does the NA relate to resolution?

The resolution of an optical microscope is defined as the shortest distance between two points that can still be distinguished by the observer.  This can be perceived by the concept of Airy diffraction patterns (named after physicist George Biddell Airy).

I will not go into the physics of it now (since I need to learn it first). It is enough to say that point sources of light in the specimen (e.g. fluorescent proteins) appear as bright disks, surrounded by bright concentric rings. 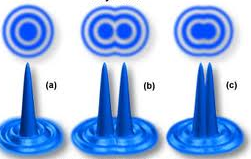 The limit of resolution is determined by the ability to distinguish between two closely spaced Airy disks. The 3-dimentional representation of the Airy disks is called the point spread function. The resolution of the microscope is determined (in part) by the NA of the objective. You can explore it yourself using the Java tutorial of NA & resolution at MicroscopyU. You can see that the larger the NA, the better the resolution.

The resolution is determined not only by the NA of the objective, but also of the sub-stage condenser. The alignment of the two, to create an accurate light cone, is also important.

NA in the first two equations refers to the general NA of the microscope.

These equations were calculated based on multiple optical factors and, in some instances, the actual resolution may be even better than the limit calculated by the equations.

However, other factors, like background, contrast, illumination and more can also affect the resolution.

The practical limit (for green light) is ~250nm.

Just to put things in perspective, the size of an epithelial cells is ~30µm, that of a yeast cell is ~4-5µm. The size of the yeast nucleus is ~1µm. A chromosomally packed DNA length of 100kb (100,000 bases) is ~500nm, when stretched. Viruses are usually ~30-50nm. A single ribosome is also ~30nm. A single average protein will be ~5nm in size. Therefore, viewing single molecules in cells is a real challenge.

This entry was posted in General optics and microscopy and tagged definitions, resolution. Bookmark the permalink.

One response to “Numerical aperture and resolution”