Unlike transcription, it is much harder to image translation at the single molecule level. The reasons are numerous. For starters, transcription sites (TS) are fairly immobile, whereas mRNAs, ribosomes and proteins move freely in the cytoplasm, often very fast. Then there are only a few TS per nucleus, but multiple mRNAs are translating in the cytoplasm. Next, there’s the issue of signal to noise – at the transcription site, the cell often produces multiple RNAs, thus any tagging on the RNA is amplified at the transcription site.  Last, it is fairly easy to detect the transcription product – RNA – at a single-molecule resolution due to multiple tagging on a single molecule (either by FISH or MS2-like systems). However, it is much more difficult to detect a single protein, be it by fluorescent protein tagging, or other ways (e.g. FabLEMs).

The rate of translation is ~5 amino acids  per second, less than 4 minutes to a protein 1000 amino-acids long. This is faster than the folding and maturation rate of most of even the fastest-folding fluorescent proteins. This means that by the time the protein fluoresce, it already left the ribosome. However, attempts were made in the past with some success.

END_OF_DOCUMENT_TOKEN_TO_BE_REPLACED

The July issue of Nature Methods is dedicated to microscopy. Actually, to quantitative microscopy. As the editor points out, Microscopy started as a qualitative method to visualize structures and movement of single cells and organelles. With advancement of optics on the one hand, and computer programs on the other hand, microscopy is becoming much more quantitative. We can now accurately measure signal intensity; get to time resolution of milliseconds and spatial resolution of a few nanometers. We have an increasing number of tools for fluorescent microscopy that allow multiple color imaging in both fixed and live cells. However, many of the programs are still in their infancy and there is room for improvement. Another problem the editor points at is the fact that most of “bioimage informatics” tools are not so much user-friendly, especially for biologists with little or no background in physics and programing.

Last, but not least, is the fact we can use only a limited number of colors per experiment, thus limiting the number of genes or proteins that we can measure in each experiment. This is in contrast to the accumulating whole-genome/transcriptome/proteome data that is now prevalent in the literature.

So, in the next several posts I will review the articles in this special issue. I think it would be interesting.

In this section, a brief overview of a recent paper from Erin Schuman’s lab points to a new method to assess mRNA abundance in a sample. This method, Nanostring nCounter, uses mRNAs attached to a surface, and probes that are fluorescently bar-coded (i.e. each probe has a specific color barcode). Following hybridization, one can estimate for each mRNA the signal intensity and assess mRNA level. However, this method was not used in situ to determine mRNA levels of multiple genes in the same cell.

A similar bar-coded approach, but with single cell application, is found in an article in this issue. I will discuss that in a separate post.

Super resolution FlAsH – Fluorescein-arsenical helix binder (FlAsH) is a small fluorescent molecule that binds to tetra-cysteine structures in proteins. However, this dye proved to be both toxic to certain cell types and have a high fluorescent background. Here, they mention a work from the lab of Christophe Zimmer, which used FIAsH and super-resolution microscopy to look at HIV intracellular complexes at ~30nm resolution. Using UV light (405nm) in short pulses, instead of the standard blue (488nm) excitation light for FIAsH, they were able to show that the FIAsH-tetracysteine complex is photostable and can fluctuate from dark to bright states, leading to low background and high resolution.

Omnidirectional microscopy. Here, Weber & Huisken discuss two papers published in this issue that deal with in toto imaging of tissues, organs or embryos. 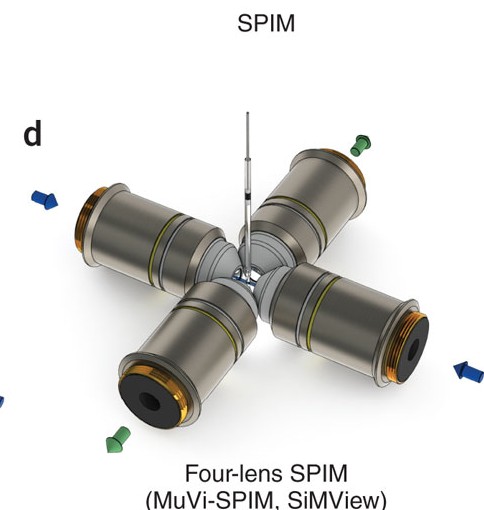 The commentary section contains three articles which discuss why bioimage informatics is important; what are the current challenges in creating open-source software for image analysis; and a call to make such software more users friendly.

I know that bioimage analysis software is important to advance the field; I get why open-source would be a better, but more challenging choice for software development; and I am truly and completely agree that these programs should be user friendly, to biologists like me. I mean, I don’t even know how to use all of the capabilities of PowerPoint, let alone programs like ImageJ or Metamorph, which are still relatively friendly compared to other stuff. I certainly do not know how to write plugins or applications and such.

Speaking of ImageJ, there is a historical commentary: 25 years from NIH Image to ImageJ software. This would probably interests programmers more than biologists.

Following that, there are three Perspective articles about other image analysis software: Fiji, BioImageXD, and Icy. I tried to read some of this stuff, but it’s really more for people with programming experience, I guess.

A review paper summarizes the available bioimage tools for acquisition, storage and analysis. Unlike the commentary and perspective sections, this review is readable by a biologist like me. In fact, I would even recommend it, particularly if you are new to the field, and planning to acquire such software.

Well, that’s about it for this post. In the next post I will review the “Brief communications” section, which contains seven short papers. A third post will be devoted to reviewing the “Articles” section, with four interesting papers.

Unrelated to this special issue, here’s an interesting post from the blog It takes 30: Fluorescent protein labeling – a cautionary tale.